In 1908 a binding referendum in Orillia outlawed the sale of all alcohol. It was the culmination of a 50-year campaign to “civilize” the town and reduce the violence, crime and domestic hardship that followed drunkenness. For the next 40 years you had to trek out over the Narrows bridge to the Atherley tavern to get a shot of whiskey or a glass of beer. However, a loophole in the law did allow you to purchase a bottle of whiskey directly from a distiller, though it had to be shipped to your house, one bottle at a time, at some expense – so the wealthy industrialists didn’t have to forego their evening brandy, thank goodness (about 20 bottles a day arrived by train in 1915). Only the drunken blue collar workers suffered.
Alcohol remained illegal in Orillia from 1908 all the way to 1950. 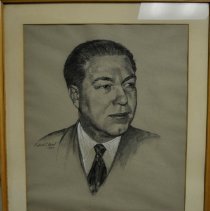 In 1950, after many other municipalities had voted to bring booze back, a group in Orillia led by Alderman Wib Cramp, arranged for a new vote to legalize both a liquor and a beer store.  Orillia and Owen Sound were the largest towns in Ontario still under the Local Option prohibition laws. Owen Sound had just voted on bringing back everything – warehouse stores, bars and cocktail lounges – and had been soundly defeated on the idea.  Hence, the Orillia group only looked to legalize bulk stores, not bars (but knew once they had their foot in the door it would be just a matter of time before bars would return).

Both the pro-alcohol “Wets” and anti-alcohol “Drys” leapt into action.  A group of businessmen led the Wets, forming the “Orillia Volunteer Workers” who argued the stores would wipe out the pervasive bootlegging trade that was rampant in town and would give the tourist trade a chance to compete with other Wet towns.  They raised over $2,000 for flyers, radio time and newspaper advertisements.

The Drys, on the other hand, moralistically argued that liquor “was evil”, dredging up images of Orillia’s brawling, besotted past.  Mayor J. Austin Cook, the local churches and “The Orillia Temperance Union” led by the stalwart prohibitionist David H. Church, trumpeted the Dry arguments. 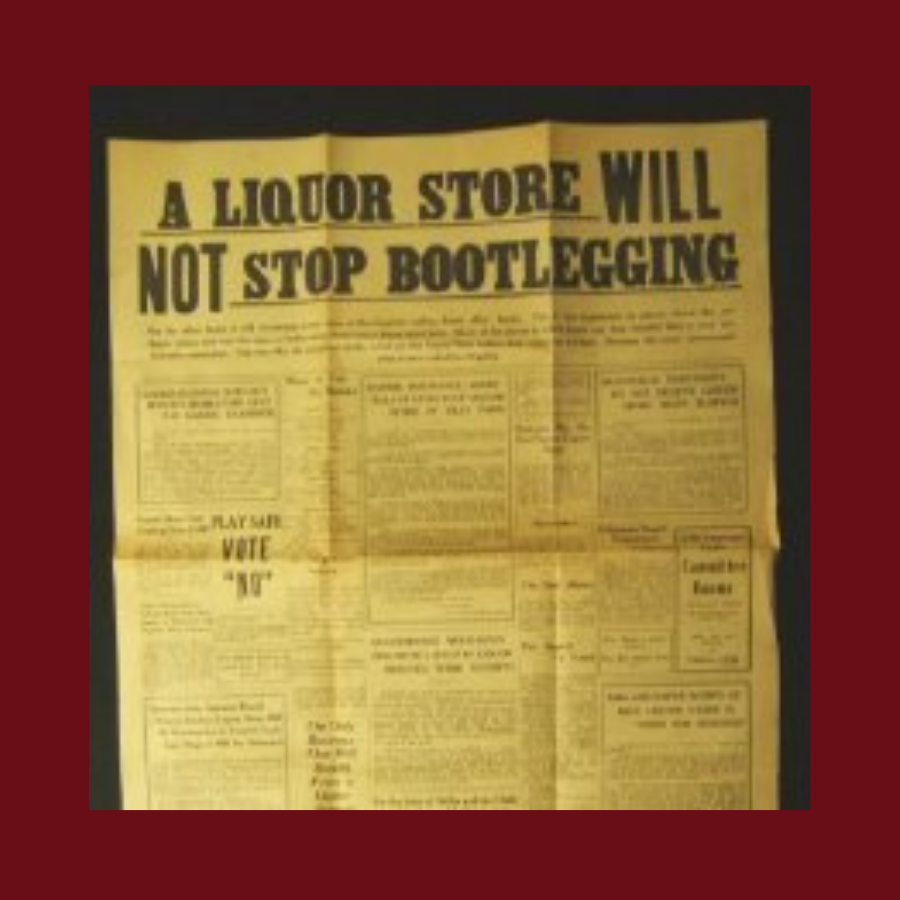 Poster issued by the Temperance League about the referendum question about the establishment of government liquor stores. 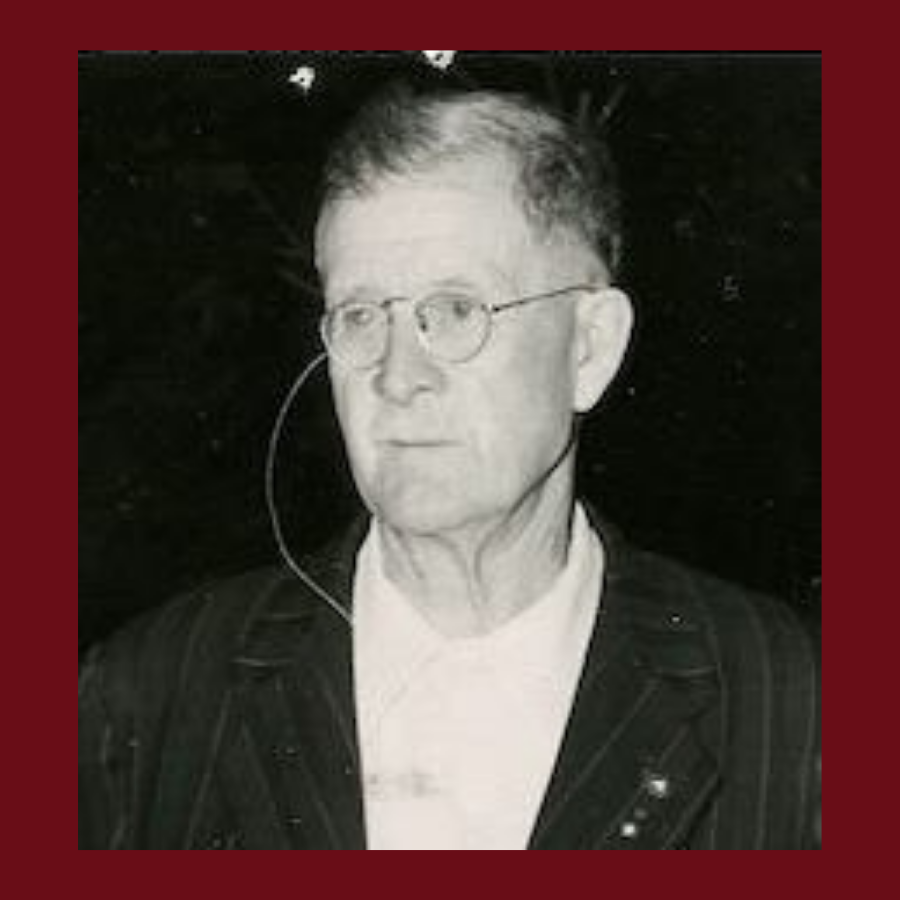 The campaign became very heated with both sides recruiting new supporters to be added to the voting lists, though the Wets were much more successful at this.  A week before the vote Alderman Cramp returned home to his Andrew Street apartment at 2am to find a brick with a death threat had been thrown though his window.  “Get out of town in 24 hours or you die”, it said.  He stayed, and belligerently ratcheted up his rhetoric.

Confident they would prevail; the Dry side was shocked to hear the result.  Needing a 60% vote, the Wets garnered 61.8% support on both questions (for liquor and beer stores). 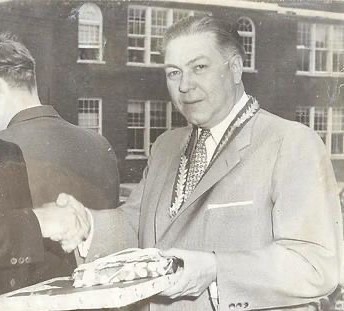 Wib Cramp raised a stiff drink in celebration with his supporters and rode that enthusiasm right into the mayor’s chair two weeks later in the municipal election.  Orillia had been transformed, for better or worse (depending on your point of view).

It took 17 years to realize phase two of the Wet’s campaign.

Another plebiscite in Orillia under the same Canada Temperance Act that brought back beer and liquor stores in 1950, was called in 1967 to legalize drinking establishments (a first try in 1962 had been soundly defeated).  In 1950 the town allowed you could then get drunk, but only at home – no public brawling would be condoned.  Now the vote was about legalizing cocktail lounges, dining rooms and bars – the “beer houses” raising fears of brawling and crude behaviour.

The fierce debate erupted all over again with the announcement of the referendum.

A group of eight restaurateurs and hotel owners, the Wets, hired a professional campaign manager who had successfully run efforts to legalize booze in 12 other towns already.  They raised $10,000 to advertise (but carefully stated they took no money from breweries or liquor companies).

The “Drys” were represented by several hastily organized groups, all working haphazardly until the last moment: the “Concerned Orillia Businessman Association”, the “Vote for Orillia” group and the “Concerned Parents Movement”.

Flyers and posters went out on both sides, speeches were made, ministers proselytized from the pulpits, full page ads appeared in the paper, and dozens of letters to the editor fanned the flames of emotions – it was like the entire future of the town rested on the outcome of the vote!  Few people  were still around who could remember Orillia during its brawling, drunken “wild times” before WWI, but fears of it’s return were predicted, ominously.

The Wets argued economics – the tourism industry needed bars to attract customers away from other wet towns.  They made it all about personal choice and economic prosperity.  The Drys argued from a moral perspective, about the brawling, crime and wife-beating that drunkenness facilitated.

Two side-issues came to dominate the debate: First, that an “outsider” was running the Wet campaign, dictating Orillia’s future; and second, that two different ministers (RF LeDrew of the First Baptist Church and then Alan McCuaig of St Paul’s United Church) had their Sunday morning broadcasts on CFOR radio stopped mid-way when they started advocating for the Dry side (the DJ actually started playing records mid-sermon).  “Censorship!” the Drys yelled, though the station manager asserted their religious shows had been warned to avoid politics. 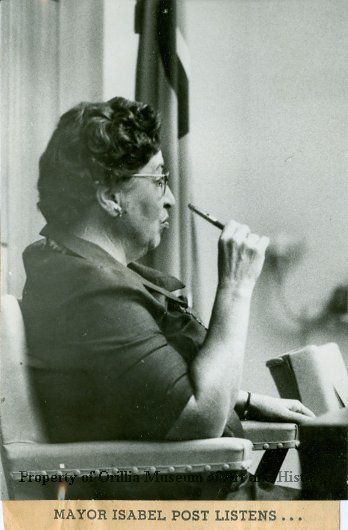 The vote was split.  Liquor sold at dining lounges and cocktail lounges was approved by a comfortable two to one margin.  But beer rooms could only muster barely 50% support (60% was needed to change the law).  Mayor Isabel Post was pleased with the outcome and lamented that a general election could not motivate voters to get out and vote with the same enthusiasm (there was a 72% turnout for the plebiscite).

So, the well-to-do tourists could now enjoy a cocktail in the hotel’s lounge, and diners could have wine with dinner in restaurants, but the blue-collar working men of Orillia still had to trudge out to “The First” in Atherley to have a beer with the boys.

The sky did not fall in.  Stiff regulation mitigated the worst negative effects of the alcohol.  And sure enough, not long after bars did return to Orillia.

It seems, like the other “vices” of marijuana, prostitution and gambling, regulation is better than prohibition and the lawlessness it fosters.  By the 1970s, Orillia had become a mature enough community to be able to handle the scourge of alcohol responsibly.  But don’t get into a debate – there are still some very strong feelings among the few people still around town today who supported the Dry side!