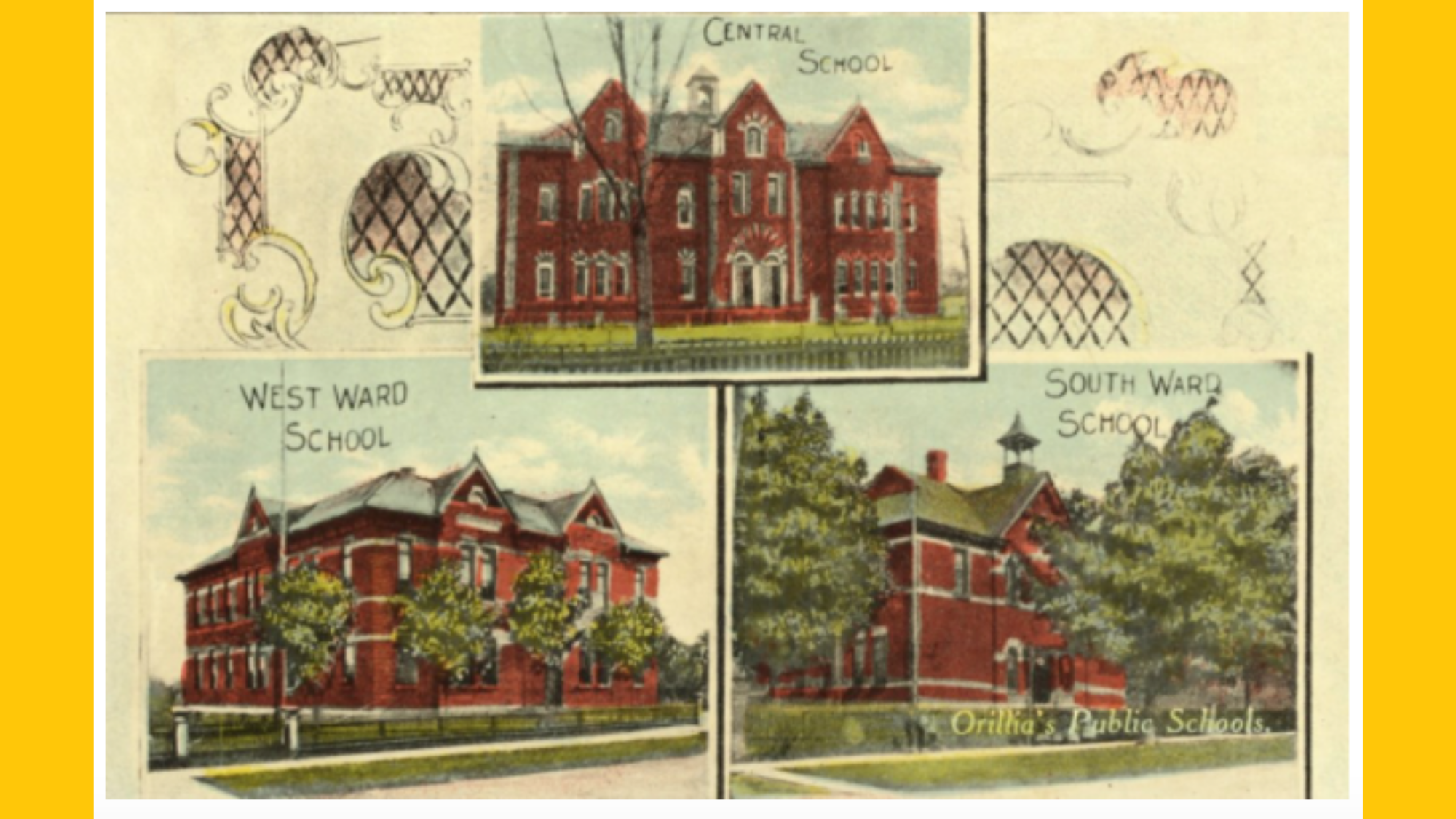 In December 2021, it was announced that Orillia would have a new elementary school in 2024 to address the quickly growing area of West Ridge. As Orillia’s population continues to grow, it is a good time to reflect back on Orillia’s early days when formal education was being established in the community.

During the Pioneer period, pre-1843, there were a total of fifty schools in Simcoe County. Two of those schools were located in Orillia.

Orillia’s first elementary school opened in1833, when pioneer James Dallas converted a stable on his Barrie Road property into a schoolhouse. His wife and two daughters taught children free of charge. However, the first proper school, a one-story log building, was later built on the south side of Coldwater Street. 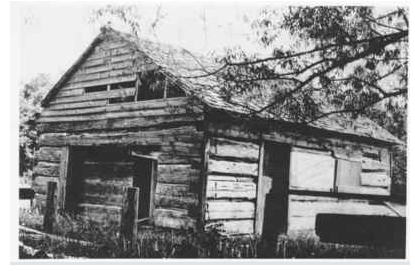 In Orillia during this time period, there were few teachers, most were sent by the Methodist Church. In the early days, parents and school officials objected to hiring female teachers, believing women couldn’t maintain the level of discipline or teach boys how to be proper men.

Conditions for teachers were dreadful, particularly in rural Ontario. In return for poverty-level salaries, teachers were expected to prepare for and teach all grades and maintain discipline.  They kept the schools clean, hauled wood for the stove and brought water from the well.

Despite these conditions, teachers had no job security, no sick leave, no pensions, no health insurance and no rights. Some lived under the harsh scrutiny of communities eager to judge their every action and worked for frugal trustees who could neither read nor write, but who had ultimate control over their livelihoods.

By 1847, there were eighty-three common schools in Simcoe County. It was the ﬁrst year government records listed teachers by gender and only one in ﬁve public school teachers was a woman. By 1860, one in four teachers were women, it was almost equal in 1870, and by 1880 women teachers were in the majority.

Although women were well-educated and made excellent teachers, the reason behind their increased numbers was economic. A school board could hire two women for the price of one man – even though his salary was already low

In 1861, Elizabeth Rawson, the first female teacher was hired in Orillia. She received about $120 a year while the school’s other teacher, William Jupp, earned $320 a year.

In January 1876, the County Council passed a by-law to establish a High School in the Town of Orillia. The first school trustees were Rev A. Stewart, Rev. John Gray, H.S. Scadding, Melville Miller, D.J. Beaton and George J. Booth.

The Orillia High School was built at a cost of $4,606, and opened in 1877. George B. Ward was Headmaster for the fifty-seven students. Sitting atop the hill at Borland and Peter streets, it had four classrooms, an assembly hall and a gymnasium.

Thanks to the local lumber boom of the late 1800s, Orillia’s population quickly grew and more elementary schools were needed. The public-school board, with a $9,000 grant from Town Council, decided to build one large elementary school. In 1881, construction of the two-storey Central School began, located on Coldwater Street, located just west of the earlier elementary school site.

Central School was built by Thomas Kennedy, who was considered to be the leading architect of Simcoe County. The school officially opened in 1882 at a final cost of $12,000. Principal George McKee and a staff of eight teachers welcomed approximately 390 pupils to the new school. 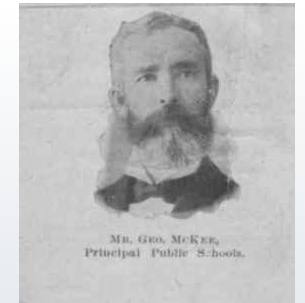 In more than half of the townships throughout Simcoe County, the local superintendents were clergymen of some Protestant denomination. This gave offense to Roman Catholics, and was one of the chief reasons for the Separate School clauses in the Common School Act in 1853.

By 1859 there were Separate schools established in Simcoe County with Orillia’s first Catholic school being a simple log building built in 1850 next to a log church located on the Coldwater Road hill. In 1879, increased enrolment led to the building of the first Catholic elementary school beside the new brick church, Guardian Angels, on West Street. In 1894 a fire had severely damaged the school interior, but it was still able to be used and was eventually enlarged in 1957. 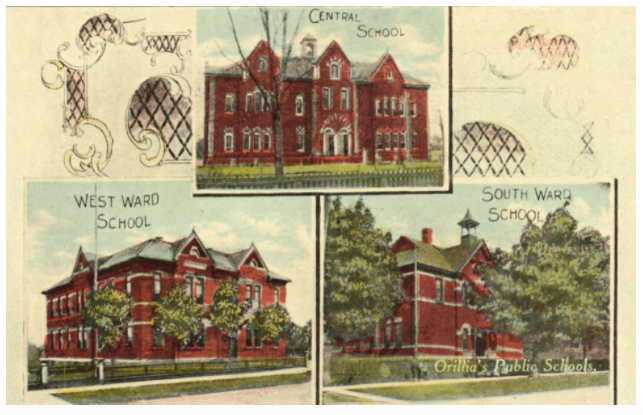 Around 1897, another two elementary schools were built in Orillia: West Ward school at the southwest corner of Mississauga and Dunlop Streets and South Ward School built on the north side of King Street between Peter and Front Streets. 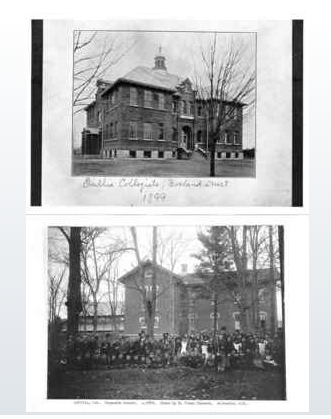 In 1898 the Orillia High School burned to the ground. For two years students attended classes in another building on the downtown’s main street, until the new high school was completed in 1890. Orillia Collegiate Institute (OCI) opened with ten classrooms and an assembly hall, accommodating one-hundred and eighteen students which grew to one-hundred and sixty-nine students by 1902. Attached to the back of this school was a poorly heated, barn-like building used as a gym. In 1928, a new edition was built with two more classrooms and a proper gymnasium.

Over the years, a number of the original schools have closed, been put up for sale or torn down. West Ward School burned down in 1967 and the site became the front parking lot of Soldiers’ Memorial Hospital.

The South Ward School on King Street was closed around 1970 and the building has changed hands over the years.

Central School was closed in 1985 and remains one of Orillia’s oldest public buildings with its original design. The building remained in use until 2016 when the City Council put it up for sale, under a process allowing the city to influence how the heritage structure is used.

Orillia District Collegiate & Vocational Institute (ODCVI) along with Park Street, built in 1961, were ultimately torn down to merge into the new Orillia Secondary School in 2015 on the Park Street site.

Education in Orillia has evolved over the years from the converted barn on the Barrie Road. We now have state-of-the-art schools in our community. We hope you have enjoyed this walk down memory lane about early education in Orillia.

A History of Simcoe County

Part II of It’s Elementary: A Brief History of Ontario’s Public Elementary Teachers and Their Federations