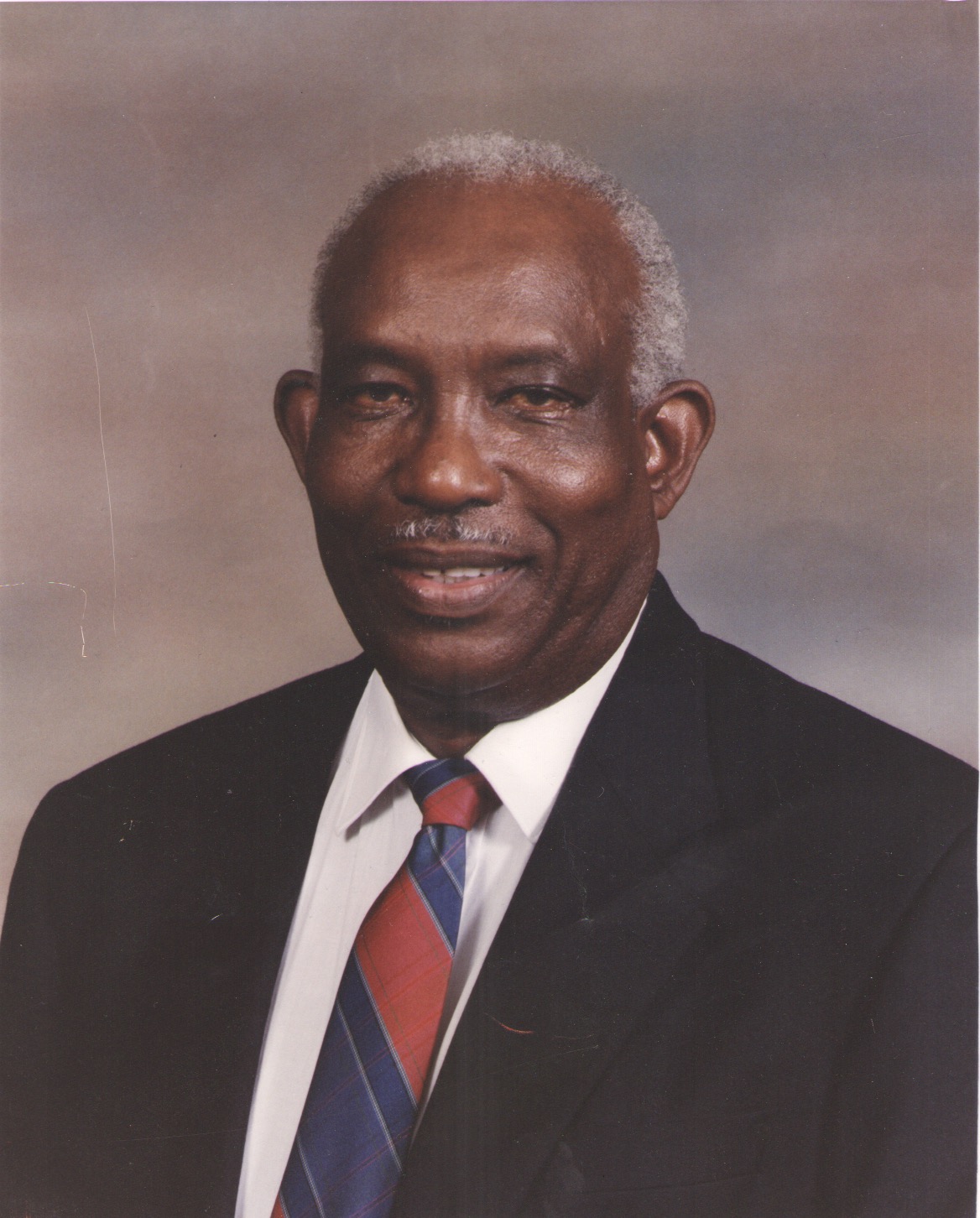 We pay tribute to Fayne Bullen for his dedication to the enrichment of our community as an educator, historian, politician, community activist and builder. Fayne has shown through his fifty-five years in Orillia that, when he sees a need, he rolls up his sleeves and gets the job done. He makes things happen. One wonders how he had time for everything. Fayne’s love of Orillia is illustrated by how his devotion to our community has made an immense difference for many people

Fayne was born and raised in Snell Hall, St. Patrick’s, Grenada. He grew up in a large, thirteen-plus, close- knit family headed by his grandmother, who was his mentor and idol. Fayne explains, “My large family respected and valued community residents and supported the less fortunate. At mealtime everyone, was invited to eat, including visitors. We cared.” Fayne internalized and demonstrated these values with his commitment to our community throughout his life.

In 1955 Fayne came to Canada. He graduated from Mount Allison University in Sackville, New Brunswick with an Honours Bachelor of Arts in History and received a scholarship to Queen’s University, where he earned an Honours Masters degree in History. After achieving a First-Class Teaching Certificate from the Faculty of Education at the University of Toronto he had a brief stint teaching in Toronto. We are fortunate that Fayne then chose to make Orillia his home and to raise his family here.

Fayne spent 24 years as head of the History Department at Park Street Collegiate, and left a lasting legacy at the school. He was Professional Development Chairman for Park Street and for the County of Simcoe Secondary School teachers. He worked as a Master Teacher who hosted and mentored student teachers in his classroom for many years. He also taught the Summer Course at the Faculty of Education in Toronto for three years.

Former colleague Jim Watt commented, “As a history teacher and department head at Park St Collegiate, Fayne Bullen served as a positive role model for the teachers in his department. Instead of teaching history as mostly a myriad of facts to be memorized, a method that turned off generations of students, he posed questions about the past and researched historical data which would provide relevant answers to these questions.  If you happened to walk by Fayne’s classroom when the door was open, you would invariably hear students involved in enthusiastic debate.”

On the occasion of his 90th birthday, Fayne was recognized by a former student, Simcoe North MP Bruce Stanton, “Fayne taught me history in grades eleven and twelve and helped to pique my interest in history and politics. Like so many great teachers in our lives, they, like Fayne, leave lessons and perspectives that stay with you throughout your life.”

Fayne’s commitment did not end in the classroom. Throughout his life in Orillia, he was a community activist working for change in many facets of Orillia life.

Fayne was a member and leader in many Orillia organizations. He was a long-time member, then Chair of the Orillia Historical Society and was a member of the Committee that wrote the operating guidelines for the Orillia Museum of Art & History (OMAH).

Fayne has been a member of various service clubs that do charitable work for Orillians in need. As a member of the Rotary Club, Fayne chaired the committee that managed the entertainment program for foreign university students invited annually to Orillia. He is also a member of the Golden Kiwanis Club, today called The Champlain Seniors Club and he has acted as both a member of the board and chair of the club.

Fayne’s focus on helping others went beyond our borders. He and his second wife Catherine were founding members of not-for-profit Paso Por Paso, a group from Orillia and surrounding area that provides assistance to poor Guatemalan families with education, micro loans and other support. An exchange with students at our local schools enriches our students. In Guatemala on February 2014, Fayne was recognized for his support of key improvements at Tierra Linda School in Guatemala, with a plaque and a party to celebrate his 85th birthday.

Food insecurity is an ongoing problem for many people in Orillia and surrounding area. Fayne was active with others in starting the Sharing Place Food Bank. In addition, he led a group that, in 1981, founded the Simcoe Legal Services Clinic, providing free legal services for people with low income. He served as its first chair.

Fayne saw the critical need for non-profit housing in Orillia. He promoted the purchase of a house

adjacent to St. James’ Anglican Church and converted it into four rental units. It served for years as Couchiching Jubilee House, a shelter for women. He was instrumental in forming the St. James Court Non-Profit Corporation which purchased the old YMCA building on Peter Street and re-built it into 37 apartment units. Over the years, he had a hand in the building a total of 202 non-profit housing units in Orillia.

Fayne became active in the local political movement as a way to make change. In 1971 he became a member of the New Democratic Party. Its policies and programs were in keeping with the ideas and philosophy he grew up with in Grenada. He ran as the federal candidate for the NDP in three elections: in 1974, 1978 and 1980, increasing community support for the NDP.

He ran in the Provincial elections in 1981, 1985 and 1987. Although he did not win, he received accolades from a wide variety of community leaders, including praise for his efforts in the press reports.

After retiring from teaching in 1989, his students encouraged him to seek a seat on the Orillia City Council. A group of students appeared unsolicited at a nomination meeting at the Orillia Opera House with a large banner which read: “NO FAYNE NO GAIN: ELECT FAYNE BULLEN.” With their help he won the seat easily. He served nine years in total as a City Alderman, from 1990 to 1999.

Throughout those years, he served Orillia with dedication and enthusiasm. He sat on a wide variety of committees, acting as the city representative and in some cases chairing the committee, including Parks and Recreation, Housing, Planning Advisory Committee, Children’s Aid Society, Simcoe Airport Commission, Opera House Committee and the Leacock Board to name a few.

Recognizing his capability, Fayne was appointed by the province to sit on the board of Ontario Municipal Employees Retirement System (OMERS), the second largest pension fund body in Ontario, serving close to nine years. In addition, he was appointed to the University of Toronto governing board and the Order of Ontario Awards Committee.

Also, in honour of Fayne’s 90th birthday, Simcoe North MPP Jill Dunlop rose in the Ontario Legislature to honour him for being “an exemplary community leader.” His former campaign manager Roger Pretty said,” He did everything with energy and gusto, he worked from dawn to dusk, he put his whole self into it.”

2020 marked the 55th year of Fayne living in Orillia. He professed his love for our community and said, “The City is indeed a warm, friendly place of opportunity in which to live and to raise a family. I am now 91 years old and I can truthfully say that my family and I deeply and truly love Orillia. I can also truthfully say that I have done the very best I am capable of doing to make Orillia a great place in which to live. There is no place other than Orillia that I would rather have lived the years that I have so far enjoyed. For me, it has been wonderful. “

Fayne has given of himself to our community. He has exemplified the values passed on to him by his grandmother, to respect and value the community and to support the less fortunate. We know that his grandmother would agree. In celebration of Black History month, we honour and pay tribute to Fayne Bullen, Citizen Extraordinaire. 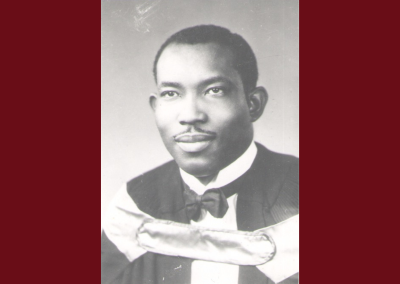 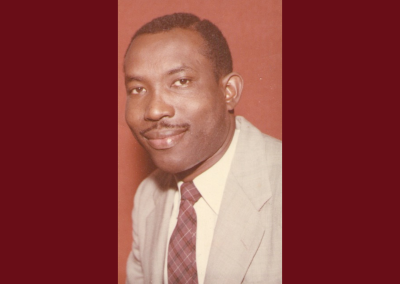 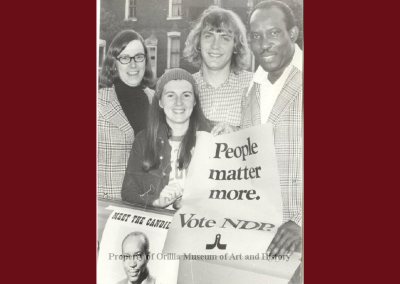 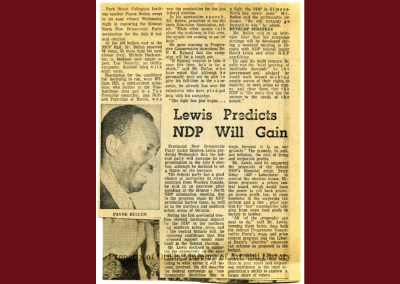 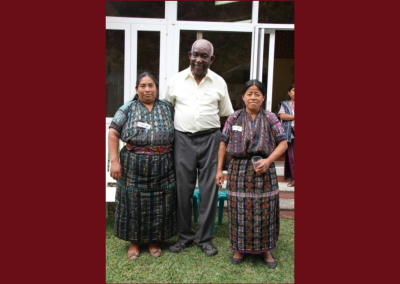 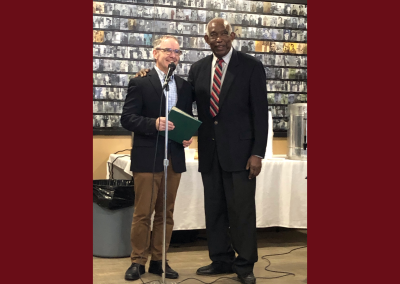