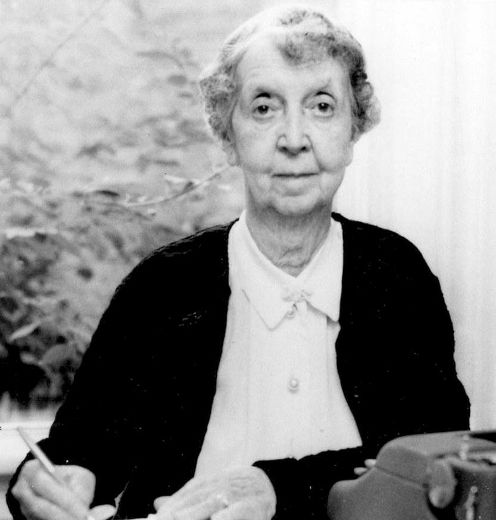 Marian Keith was the pen name for Mrs. Esther MacGregor nee Miller. She was born in 1874 In the village of Rugby, Oro Township (now Oro-Medonte), to parents who instilled in her the value of education, a keen interest in learning, a love of good literature and a strong belief in the Presbyterian faith. These strong values guided her on to a path as an accomplished author and encouraged her dedication to her church.

Esther attended school at Rugby and Edgar and her secondary education was completed at the Orillia Collegiate Institute. She was educated at the Normal School in Toronto in 1896, where she obtained her teaching certificate.

A teacher and a writer, Marian Keith emerges

Esther began teaching Junior Fourth Class at Orillia’s Central School in 1896. While teaching, Esther nurtured her passion for writing. She wrote articles on the side for Teacher’s Monthly and worked on the editorial staff of the Presbyterian Church’s Sunday School publications.

Her teaching career was not long lasting.  Esther Miller resigned from her teaching position in 1906 to pursue her passion, a full-time career in writing. Initially, Esther Miller wrote under her own name, but when she discovered another author named Esther Miller, she adopted the pen name Marian Keith after her niece, Marian Keith Harvie.

Her marriage and her writing

On July 27, 1909, Esther Miller married Reverend Donald C. MacGregor, minister of the Orillia Presbyterian Church. Throughout their marriage, Esther accompanied her husband to his many postings at churches in Toronto, Calgary, London, Brantford and other cities, working alongside him as a Sunday-school teacher and coordinating other church activities.

Her home and church duties were of great importance to Esther. Her writing career came second. Even though it was difficult, she determinedly continued with her writing. Esther wrote whenever she had a spare minute, whatever time of the day, whenever she found an opportunity. It is said that she was a painstaking writer, often revising he drafts up to twenty times until she was completely satisfied with the quality of the work.

The proof is in the pudding.  Her commitment to writing did not wane. Over her lifetime, she wrote seventeen novels and one screenplay. According to scholars, seven of her seventeen novels were written at the manse in London, Ontario, where her husband was the minister at old St. Andrew’s Presbyterian (now First-St. Andrew’s United Church) for more than twenty years, starting in 1914.

According to a London Post article published in November 2014, McGregor wrote, during her time at the manse in London, while looking back on her Orillia-area childhood, “I think it must have been the tormenting hunger for more stories that drove me to write them.”

Many of Esther’s novels, such as Duncan Polite and In Orchard Glen, were set in the Rugby and Edgar areas of Oro Township. Her writing contained local yarns, but also centred on strong religious themes of her Presbyterian faith, encouraging her readers a faith in divine mercy and social consciousness seeking to improve the lives of the poor and uneducated.

Her book Silver Maple, (1906) portrayed social issues at the time, rivalries between clans of English, Scotch and Irish immigrants. She showed the breakdown of these tensions with the children who played with each other at school, and did not recognize these differences.

Esther also co-wrote a book with authors Lucy Maud Montgomery and Mabel Burns McKinley. Courageous Women was published by McClelland and Stewart in 1934. The description on the book cover jacket reads, “inspiring biographies of girls who grew to be women of courage and achievement.” Esther was a friend of Lucy Maude Montgomery, who was also married to a minister. Although L.M. Montgomery’s name came first in the credits for the book, Montgomery commented in her journals, that she wrote only three of the twenty-one essays. The rest were written by Esther and Mabel Burns.The book focuses on women who made major contributions in nursing, the arts, missionary work, the war effort etc. Some of these women include Joan of Arc, Florence Nightingale, Laura Secord, Catharine Parr Traill and Queen Victoria. 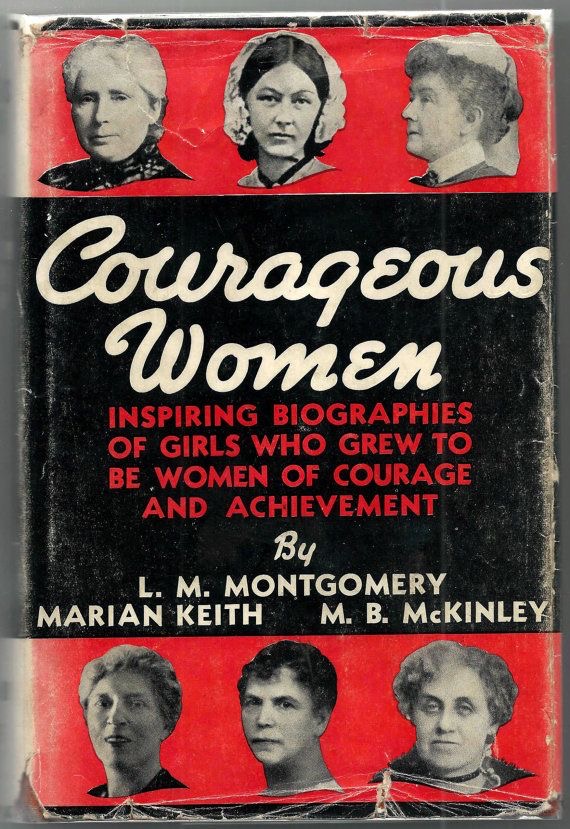 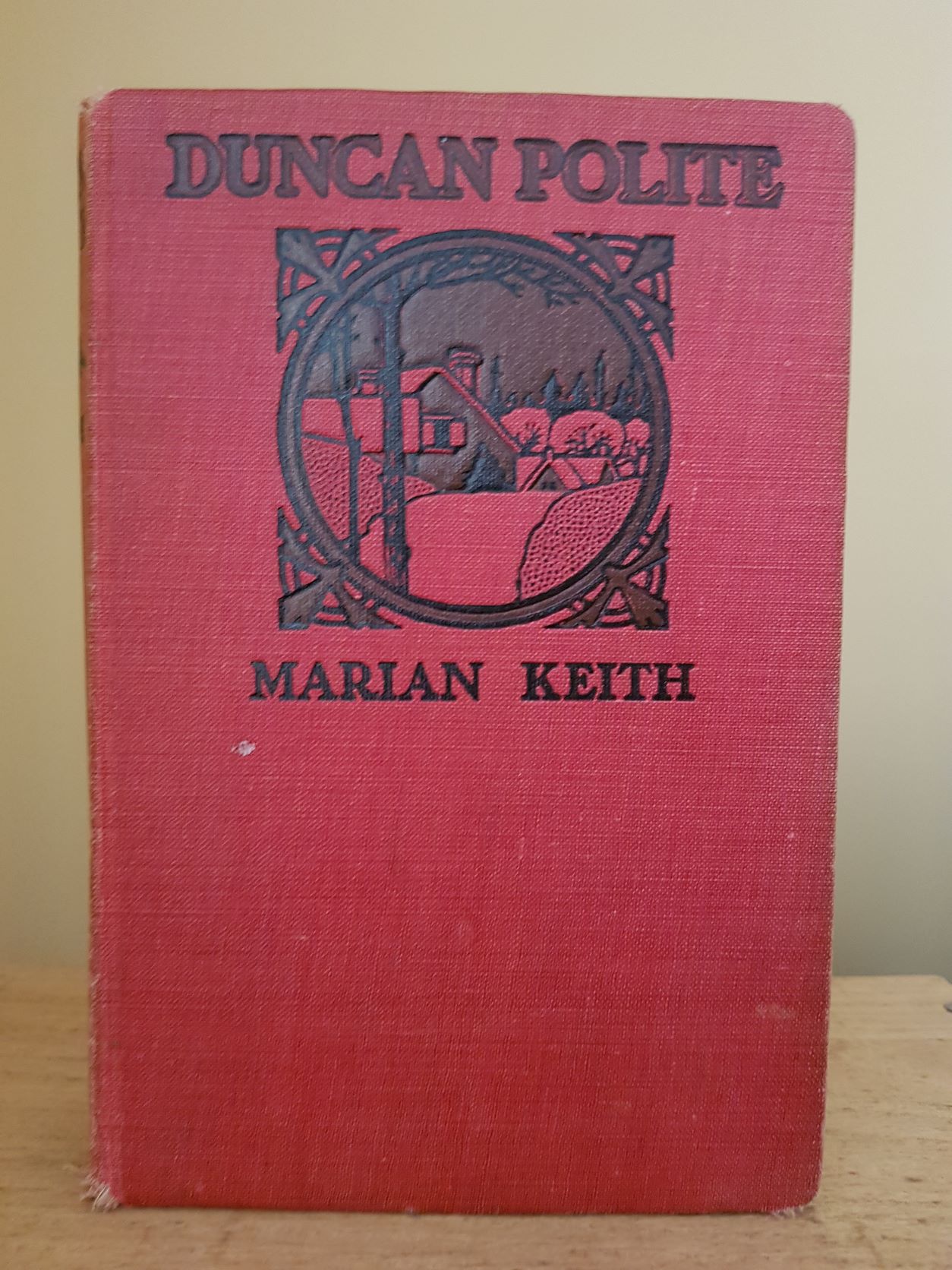 She and her husband retired to a farm on Georgian Bay. Marian’s later years were saddened by a tragic train accident, that left her husband badly injured. He died in 1946.

Esther lived the rest of her life with her sister in Owen Sound. She died there is 1961, a life well-lived. Marian Keith, was a popular author who had a strong following.  In her writing, drew on her personal experiences and fond memories growing up in Rugby, and from her life in other areas of Ontario. She juggled her many responsibilities as the wife of a minister to make time for her passion for writing. Her books are considered an important journal of life during this time.

In 2016, Marian Keith was included in the exhibit HerStory, the exhibit honoured local women for their accomplishments, their contribution to our community and for their legacy.

At the Rugby Hall, on the Old Barrie Road and the 12th Line, on June 8, 1982, a plaque was installed by the Ontario Heritage Trust dedicated in honour of Marian Keith. The plaque reads:

“BELOVED AUTHOR, WHO IN HER MANY BOOKS, PORTRAYED AFFECTIONATELY THE LIVES OF THE PEOPLE AND EARLY TIMES OF THIS PART OF ORO AS WELL AS ONTARIO.”

” REPRESENTATIVE OF HER WRITINGS ARE NOVELS “DUNCAN POLITE” AND “SILVER MAPLE” AREA 1920.”

With thanks to – Mary Ann Grant, OMAH History Committee