Robert George Beatty was born on July 18, 1904. At the age of 23, he decided to embark on a career in policing after his work as a Provincial Officer under the Ontario Temperance Act came to an end. He joined the OPP as a regular constable on May 17th, 1927 and was first posted to Cobalt, Ontario, a thriving mining town at the time. His career then led him across the province for the next decade to Windsor, Parry Sound, Midland, Barrie, Port Carling and then on to Orillia, where he served from May 1, 1940 until Jan 1, 1943. 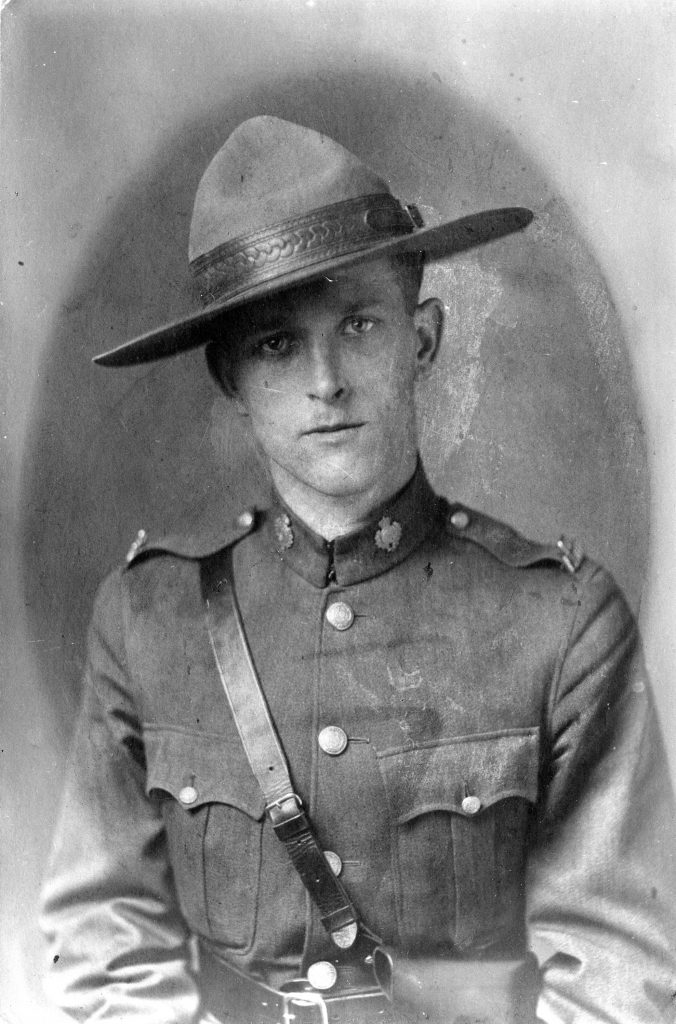 Family life in the earliest days of the OPP offered unique challenges. In the case of the Beatty family, Robert and his wife Emily often lived and worked out of the detachment he was assigned to. OPP wives became unofficial employees of the OPP as a result and Emily was no exception. From patching up visitors who arrived at her doorstep at all hours of the day and night to cooking for prisoners, answering the telephone, typing up reports and serving as counsellor to countless others, Emily’s contribution to the running of the Detachment was vital. She was a valued and trusted member of her community and was even occasionally pulled into police work.

In one story related by their daughter Kathleen, her parents were on a trip out of town in the early 1940s on one of Beatty’s rare days off from the Orillia Detachment when they stopped to pick up a hitchhiker. Hitchhiking at the time was very common, including among young servicemen. Robert had been informed that a German prisoner of war had escaped from Gravenhurst and to be on the watch for him.

As Robert pulled over to pick up the man up who was thumbing for a ride, he quickly warned Emily to “act natural and not panic.” As they drove, she chatted politely with the young man who indicated he was on his way to Toronto. Robert offered an excuse for a quick detour, saying that he had to drop off some papers nearby. When instead, they pulled up to the gates of the prison, and realizing his cover was blown, the young man dropped his perfect Canadian accent and asked “how did you know?”

Beatty explained that he was actually an off-duty police officer and that he “had a hunch” about where the young man had come from. “Just my luck,” was the only reply. Kathleen observed, despite the danger of having an unknown man in the backseat of the car, “my mother was never rumpled by these things and went along with the ruse beautifully.” As an OPP wife, Emily was often referred to by her husband’s title, as “Mrs. Corporal Beatty,” but Robert always corrected them. It was important to him that she have her own identity, and he was very proud of her achievements.

While we don’t have much background, we know that Beatty had family connections in the area as a few charming family photographs have survived: 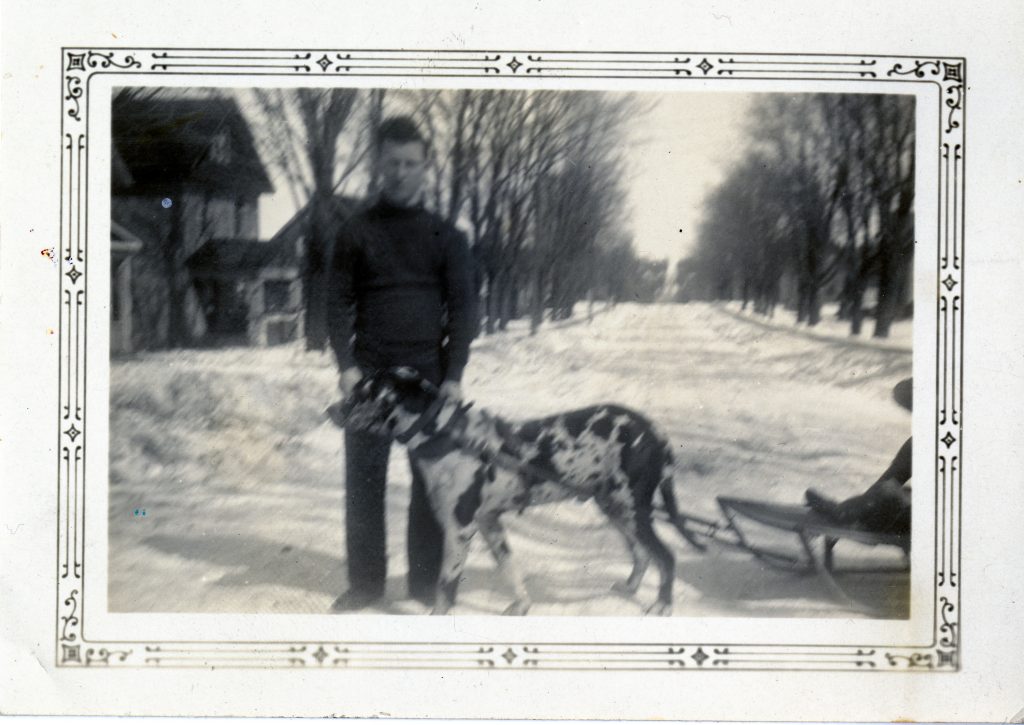 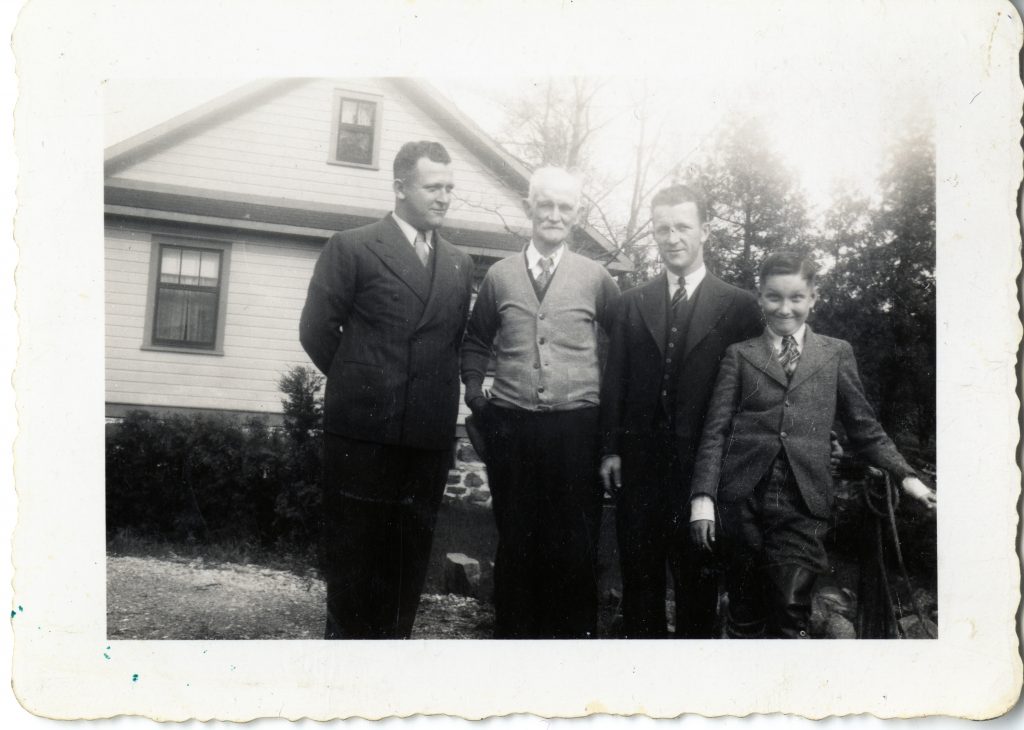 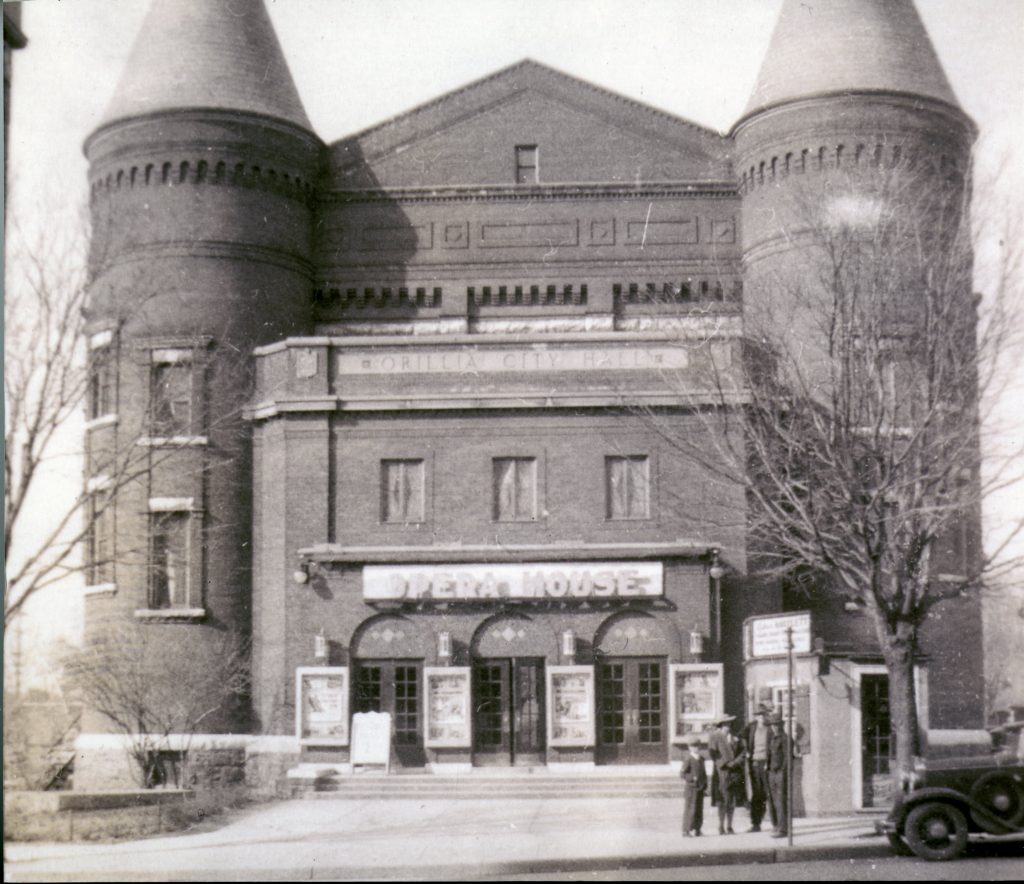 Photo: The Orillia Opera House in the 1930s.

During his career with the Ontario Provincial Police, Constable Robert George Beatty served in Orillia from 1940 until 1943. After Orillia, he went on to return to Parry Sound, followed by Sault Ste. Marie and Burk’s Falls. While it appears that he moved around a great deal, this was not unusual for officers at the time. Members would often only serve in a local community for a few years before moving on.

Numerous stories were shared with us about Beatty and his career. Each story consistently portrayed him as a man of great character and conviction who respected all of the people he encountered regardless of their race, religion or station in life. These small gestures meant the world to the people he helped. It was gestures like when Beatty made a point to be seen in uniform sitting in the front window of the barbershop in Bracebridge on a busy day in the 1940s after word had reached him that business had been falling off for the shop’s Italian owner; a subtle way of conveying the message that this business had an ally.

Another story came from a long term family friend, Leo Fritsche who, at 90, shared this remembrance. “After my dad died in 1936, we had no source of income. There was no Government Widow’s Pension Plan, Mother couldn’t speak English, and I was only 11. I don’t know the exact year, but Beatty, part of the OPP force in Parry Sound, realizing our predicament, and being about  the only friend my mother knew, went about to raise some financial support from the local  community. I do not know any more details than that. Whatever the amount was, it was a gift from heaven under the circumstances. I tell this story whenever the opportunity arises as it was the only financial support that we ever received, which I and my mother never ever forgot about.” Fritsche went on to join the Navy, thanks to a letter of recommendation from Beatty, and served during WWII, returning after the war to build a successful career in real estate.

Beatty was not one to mention his own accomplishments, preferring to do his duty quietly. He received a commendation in Police Orders in 1947 in connection to his involvement in the investigation of a double homicide resulting in a successful conviction.

A TALE OF TWO BELTS 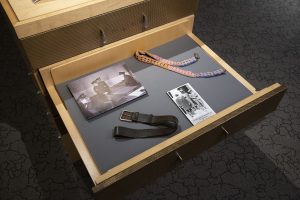 Photo: These two belts speak to the connections that Robert Beatty made with the people he encountered throughout his career as an OPP officer.

Beaded serpent clasp belt, 1940s: This hand-crafted belt was presented to Beatty by an Indigenous man as a token of gratitude. Beatty was very well respected in his community as he was viewed as being both fair and compassionate. To have received such a gift from someone Beatty would have interacted with in his capacity as a law enforcer was a mark of the respect the individual felt for Beatty, and received from him in return.

A condemned man’s belt, 1928: The investigation of the murder of Thomas Jackson is one that stayed with Robert Beatty for many years. Author Adrien Hayes profiled the OPP investigation in a book titled Murder and Mayhem at Waubamik. In 1928, a Good Samaritan farmer named Thomas Jackson was shot as he attempted to help someone, he thought was a stranded motorist. As it turned out, the man had just robbed a Canadian Pacific Railway mail car and stolen a getaway vehicle, which he now needed the farmer to help him pull out of the ditch. When the owner of the stolen car caught up to them, with friends in tow, a gunfight ensued and Thomas Jackson was shot and killed in the crossfire. Robert Beatty was the first OPP officer on scene. He arrived to find John Burowski restrained in the living room of the Jackson home, having been captured by the men who chased the train robber down. Burowski was later convicted of murder and sentenced to death. As the case made its way through the court system, Beatty spent many hours playing checkers with Burowski through the bars of his cell. As Beatty escorted the prisoner to his execution, Burowski paused to give this leather belt, his last possession, to Beatty as a memento of their time together, with a nod of thanks, ultimately, for treating him with dignity in his final hours. 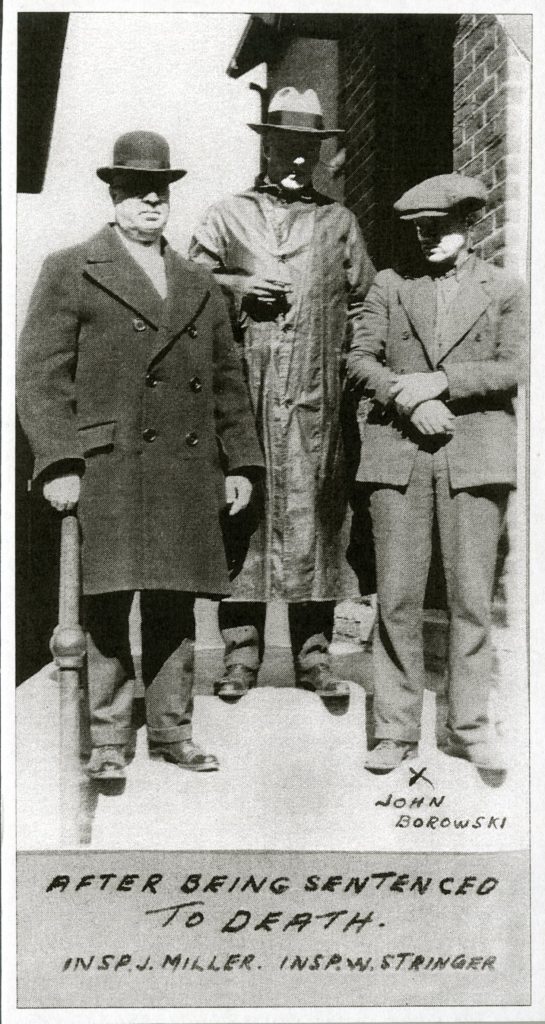 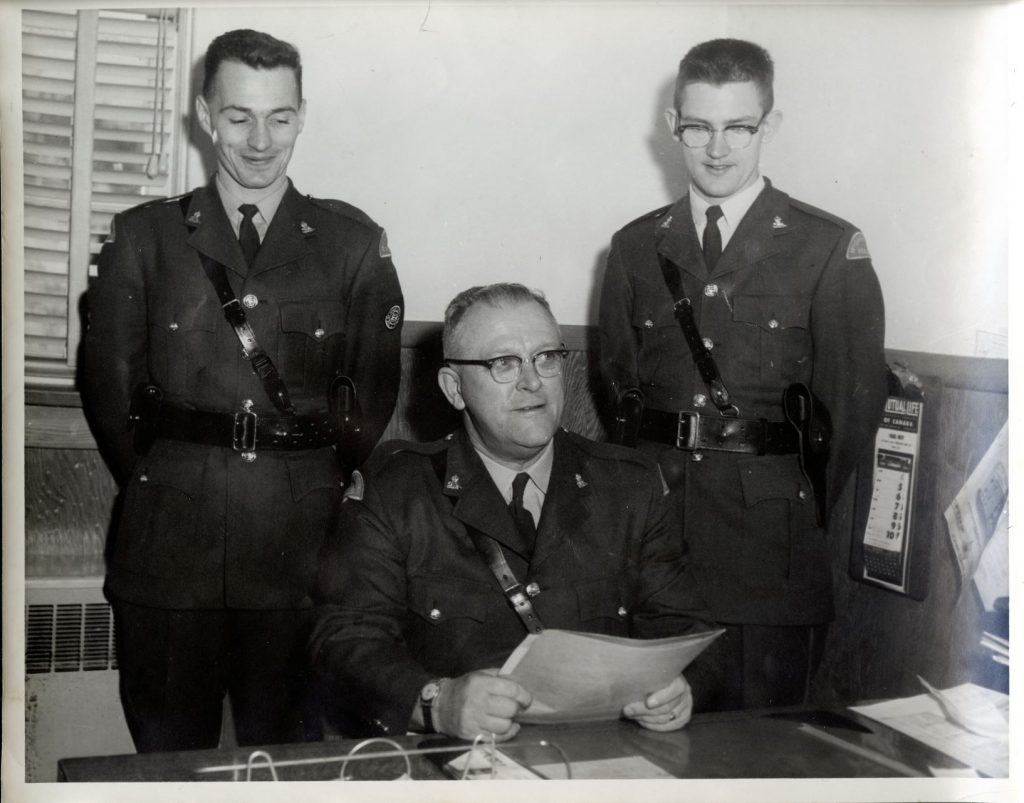 Photo: In 1951, Beatty opted to resign from the OPP and took a break from policing. In 1960, he returned to the profession as Chief of Police for McGarry Township (centre).

Photos and objects generously donated to The OPP Museum by Kathleen Adamson, in memory of her father, Robert George Beatty, badge #176.