Past Pandemics : How They Have Shaped Us

The current Covid-19 pandemic has caused unprecedented changes in social interaction and commerce.  With all the changes resulting from self-isolation, social distancing, travel restrictions, reduced shopping trips, increased on-line shopping, working at home and on-line meetings we have started to wonder if things will ever return to “normal”.

It can be instructive to examine what has happened as a result of past pandemics from an historical perspective.  It is not surprising that the course of world history has been altered. It is probably less well known that even the world’s climate may have been influenced by past pandemics. 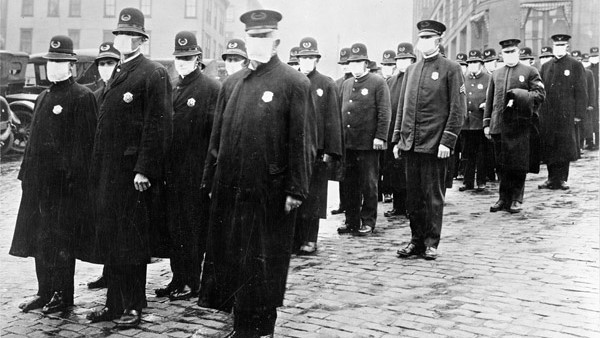 Seattle Police with masks during the Spanish Flu (1918)

The Spanish Flu Pandemic 1918-1920:  As World War I came to a close, there was a large movement of people as the soldiers from the conflict returned home.  This movement was a major factor in spreading the virus, although the exact origin of this H1N1 influenza A virus remains unknown.  There were many parallels to events today.  Public gatherings were banned, stores and schools were closed, most people self-isolated and it was recommended that everyone wear masks.  An unusual characteristic for the Spanish flu was that mortality was higher for young adults.  Mortality rates were highest for pregnant women, sometimes exceeding 50%.  The pandemic came in four waves.  The first wave occurred in the spring of 1918 and the last wave in the spring of 1920, the second wave being the deadliest whereas the fourth wave was relatively mild.  At least 50 million people died from the pandemic or about 3% of the world’s population.  The death toll from the Spanish flu pandemic was higher than that from the entire First World War.
At the Paris Peace Conference in 1919, American President Woodrow Wilson was advocating  a relatively lenient settlement with the German side.  Woodrow Wilson fell ill and was bedridden with the Spanish flu at a critical point in the negotiations. Because Wilson was not involved at this critical point, a much harsher settlement was imposed on the Germans at the Treaty of Versailles than might have been negotiated otherwise.  The harsh conditions of the Treaty of Versailles were a major factor in the eventual rise to power of the German Nazi party.
Some positive things happened as a result of the Pandemic.  Society became closer knit as people learned to look out for their friends and neighbors.  In Canada the Federal Department of Health was created with subsequent advances in health care.

The First Cholera Pandemic 1817-1824:  Cholera was originally endemic to the lower Ganges River in India.  Cholera is a water borne bacterium. It is often spread through the water supply as a result of poor hygiene.  The 1817 outbreak started in India but was carried worldwide through the many expanding trade networks and navies such as those of the British Empire.  It is often referred to as the first true pandemic because of its rapid spread across Asia from Japan all the way to the southern Mediterranean.  Total deaths from the Pandemic are unknown but probably numbered between one and two million.  There were at least five more major cholera pandemics during the rest of the nineteenth century, affecting every continent and killing many more millions.  The extensive spread of cholera was a major factor in the adoption of safe central water supply systems and sewer systems for towns and cities around the world.

The Great Plague of Marseille 1720-1722: This was the last major outbreak of Bubonic Plague in Western Europe.  Bubonic Plague is caused by the bacterium Yersinia Pestis, and is often spread by fleas which in turn are often carried by rats. It can also be spread person to person through aerosol transmission.  The disease originated in Asia and is thought to have been transported to Europe by the Silk Road (trade route to China).
After the outbreak started in Marseille, a quarantine system was developed for all incoming ships.  The ships and crews had to quarantine for 18 days and maintain a clean bill of health at a small island outside the Marseille harbour before being allowed into the city docks.  An attempt was made to prevent the spread of the plague by building a 2 meter high stone wall around the entire Marseille area.  Guards were posted behind the wall to ensure no one escaped.   The Marseille outbreak of 1720-1722 is thought to have caused about 100,000 deaths in the city and surrounding towns or almost 50% of the isolated population.  However, the measures were successful in preventing further spread of the disease.  This success was the result of hard earned experience from past outbreaks. 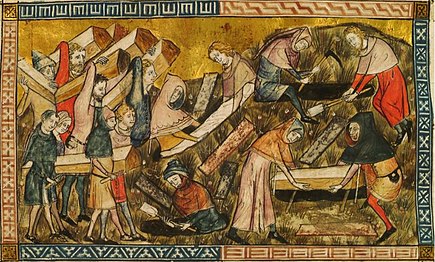 The most notorious of these past outbreaks was the Black Death, peaking in Europe from 1347 to 1351.  The Black Death was also an outbreak of Bubonic Plague and is estimated to have killed 30% to 60% of the European population.   It is thought that 125 million people died worldwide in the Black Death representing about one-third of the world population.  It took almost 200 years for the world population to recover to pre-1300 levels.
The reduction in population led to large portions of the land being reclaimed by forest.  This effect became greater after the discovery of the New World.  Many thousands of square miles of farmland were reclaimed by jungle in the New World after the inhabitants were nearly wiped out by European disease such as Smallpox.  As a result, world carbon-dioxide levels were reduced by 3 to 4%.   This change is thought to be a factor in the cooling of the climate in the Northern Hemisphere from 1300 to 1850 during a period that is sometimes called the “Little Ice Age”.   Many of the glaciers in the Northern Hemisphere started to advance during this period.
The “Little Ice Age” should be a reminder that past human activity has very likely caused climate change.  The pandemics of the past have shaped our society and our world but it appears we still have much to learn.