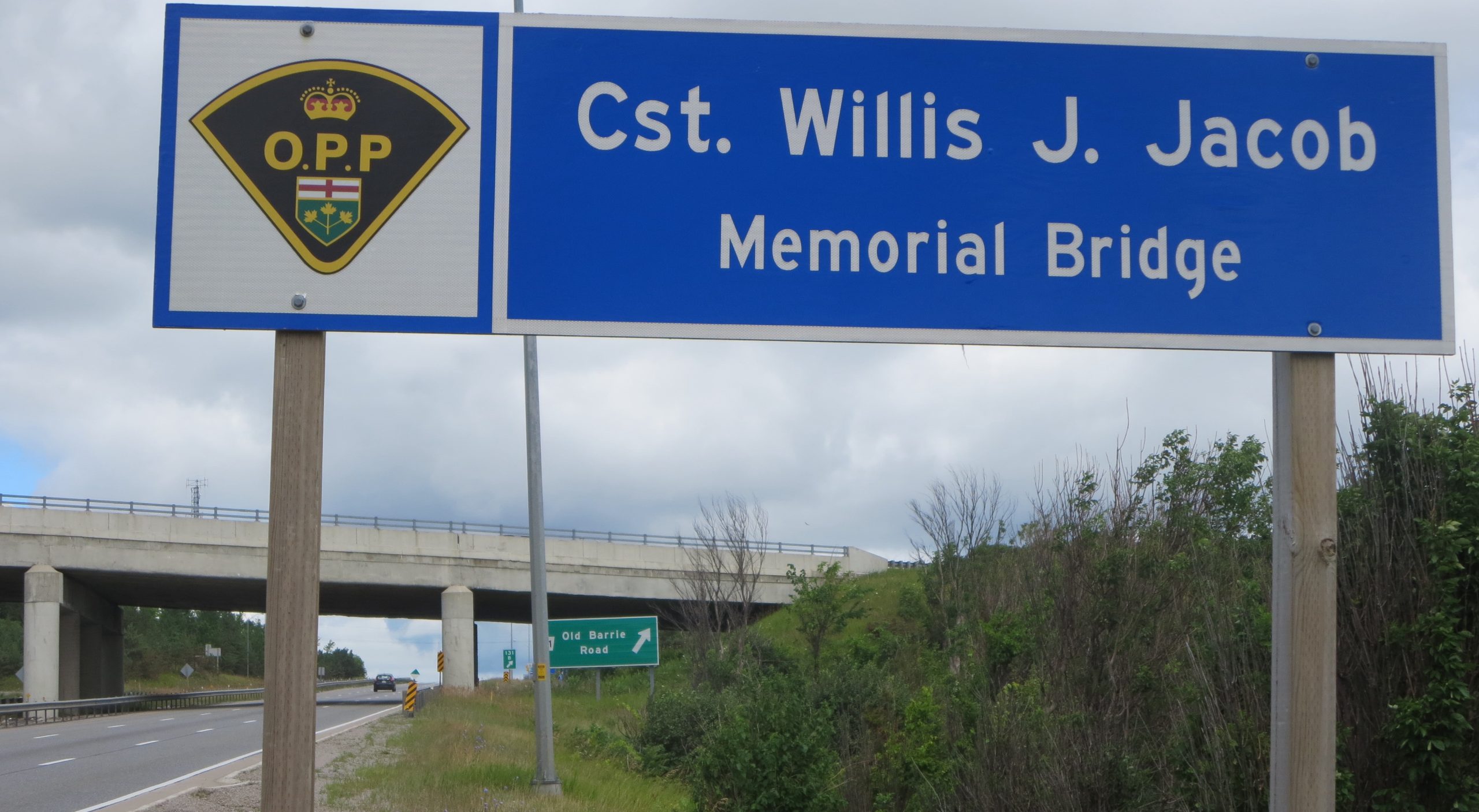 The bridge at Highway 12 South is dedicated to Constable Willis Jacob, who died in a fatal motor vehicle collision in 1958

Ontario Provincial Police (OPP) Constable Willis Jacob, age 35, a three-year veteran, reported to work as usual at Barrie District Headquarters on October 3, 1958. Assigned to the traffic squad, he was to patrol in the Orillia area that evening.

Later that night, Jacob was headed northbound on Highway 11, just south of the Highway 12 South bridge.

At that time, this particular stretch of road was a divided four-lane highway to the north of the Highway 12S bridge (that also leads to Barrie Road) and it was an undivided two-lane highway, with a middle turning lane, to the south.

There is a steady incline in the roadway on Highway 11 as you approach the bridge from the south.

Stanley Simpson of Gravenhurst was driving southbound on Highway 11, just north of the bridge at that time.

For some unknown reason, Simpson’s car, that did not have its headlights on, went out of control, hitting a road sign north of the bridge.

Simpson’s car continued for several hundred feet south, traveling under the bridge, and then swerved into the northbound lane of traffic, narrowly missing two vehicles before smashing into a third vehicle, the cruiser driven by Constable Jacob.

Both drivers were killed instantly.  Both vehicles were so badly damaged that both rescue workers and onlookers said they had never seen two vehicles so completely demolished.

‘They couldn’t have been worse damaged if a train had hit them,’ one said.

In the years that followed, OPP officers, as well as many locals, referred to this section of Highway 11 leading to the bridge from the south as “Jake’s Hill.”

Neil Hurtubise, now a retired Senior Constable, joined the OPP in 1964. He did not know Willis Jacob or his family, but the name of the hill and the story that went with it were well known to him during his 30-year career at the Orillia detachment. He wrote about it, and other memories of his career and life, in his memoirs that he recorded upon his retirement.

Over the years, motor vehicle collisions have been a major cause of death for on-duty police officers. The 1950s were no different. Provincial Constable Jacob was the sixth and final OPP officer killed in a motor vehicle accident in that decade.

Sixty-two years after that fatal collision, that bridge was the 61st to be dedicated in memory of a fallen officer in Ontario since 2005.

At that ceremony in 2019, OPP Commissioner Thomas Carrique said Jacob was “remembered as a dedicated officer who took great pride in his policing career.”

Attending that ceremony was Willis Jacob Jr., then aged 60, his daughter and two grandchildren.

Carrique said the OPP was “truly honoured” that Willis Jacob’s family members were on hand for the unveiling of the bridge dedication, and he commended retired Constable Neil Hurtubise for suggesting that Jacob’s death be remembered.

Carrique said, “He will not be forgotten and will always be part of the proud history of the OPP.”

On the last Sunday of September each year, Canadian police officers gather at the Parliament buildings in Ottawa to honour their fallen colleagues  at the summer pavilion built for that purpose.

Similarly, on the first Sunday of May each year, Ontario police officers congregate at the Memorial Wall of Honour at Queen’s Park in Toronto for the Ceremony of Remembrance to honour fallen officers in this province.

OPP Constable Willis Jacob’s name is inscribed on both memorial walls. The bridge that crosses Highway 11S, just north of where he was fatally injured in 1958, now bears his name. 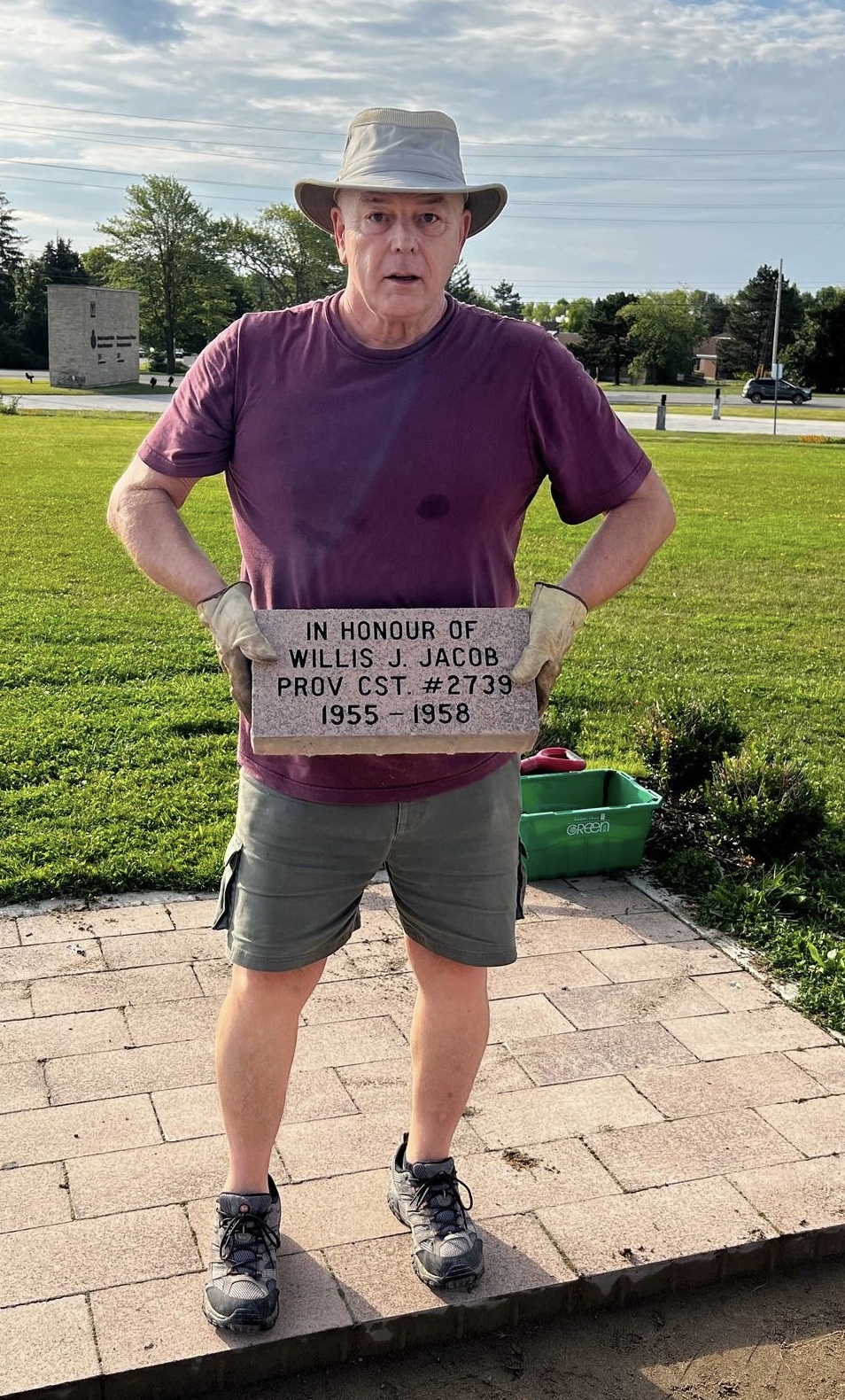 OPP Inspector (Retired) Dave Osborne holds a ‘Pathway of Memories’ Stone in honour of Constable Willis. The Stone was inlaid at OPP Headquarters on September 12.

Heroes in Life, not death. Jacob and all fallen police officers will not be forgotten.