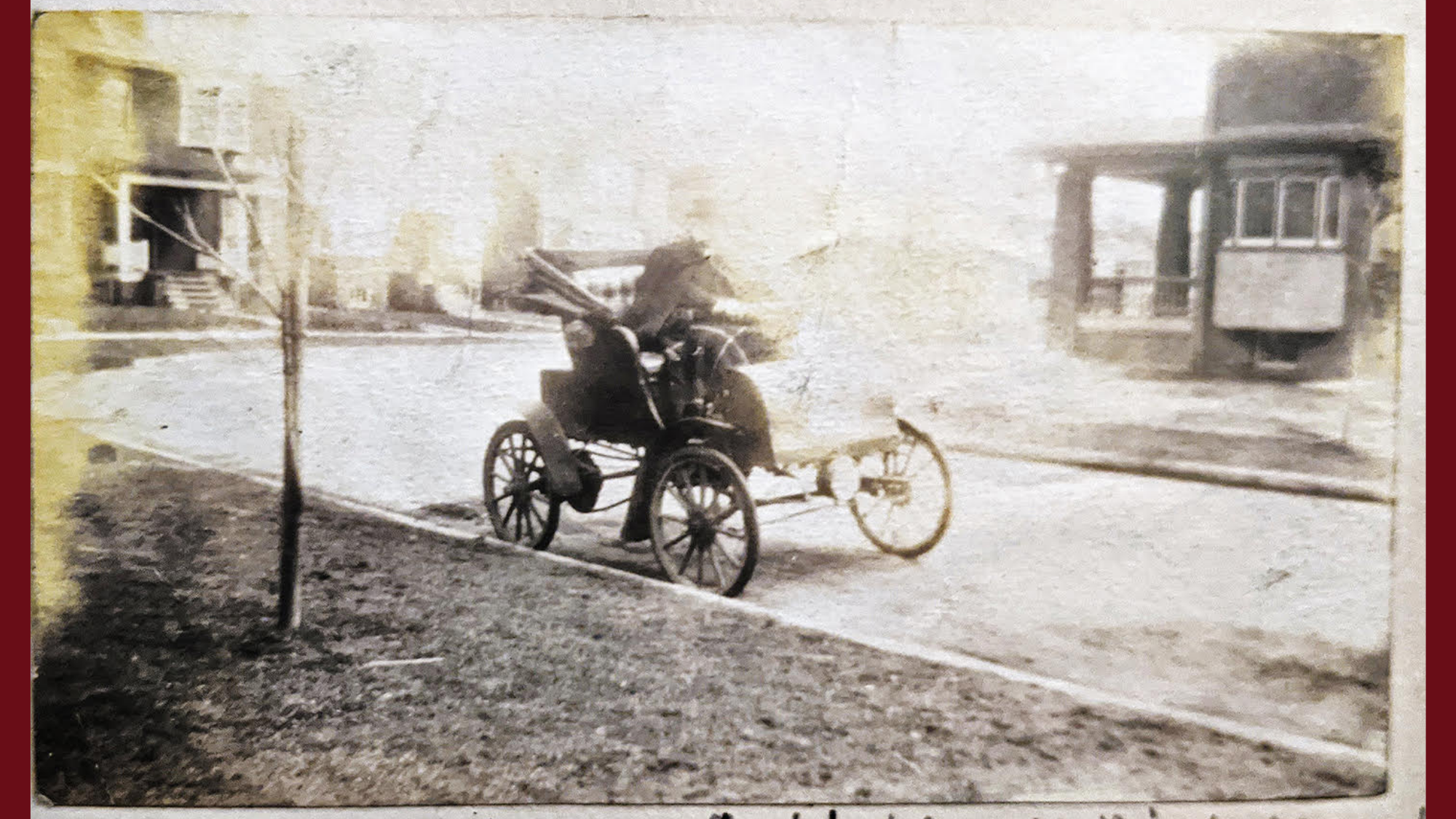 The Rev. Canon Richard W.E. Greene served in Orillia for twenty-three years. An inductee in the Orillia Hall of Fame, he made an indelible mark on our community, making it richer due to his passion and commitment. Rev. Greene retired from ministry at St. James’ Anglican Church, Orillia in 1911.  The parish presented him with a parting gift of several hundred dollars.  The cost of his move to Toronto left him with $500.  Living in a big city gave him the opportunity to realize his dream of owning a motor car.  He had just enough money to purchase an old electric Brougham.  Richard’s son, Rev. Alan Greene, wrote about his father’s misadventures with his car.

The car, “had high, hard-tired wheels.  The driver’s seat was probably four feet in the air “up forward.”  A long lever served for steering.  A noisy bell clanged underneath whenever he pounded a knob that stuck up through the floor boards.  There was no shelter for the driver.  The normal passenger capacity was one, because two passengers laid far too heavy a load on the ancient storage batteries.  So, father rode in a lonely state, looking like Elijah in his chariot of fire as he swept through Toronto’s streets at six or seven miles an hour.”

“If there were hills to climb, he zig-zagged across the city on level streets, gaining a few feet as he came back on to streets a shade higher and nearer his destination.”  Returning, “he could coast quite decent distances.”  He was the Prison Chaplin at the Toronto gaol and could speedily travel to there down Yonge Street.  The return journey however, took hours.

On one occasion, Richard lost control of the car, mounted the sidewalk, “and crashed through a plate glass window of a little shop in which a number of Jewish tailors were working.”  A police officer helped extract the vehicle.  The tailor shop engaged a lawyer to sue for the cost of the window.

Another time, Richard offered Alan a ride up Yonge Street, but Alan wisely refused suspecting that he would have to jump off and push the car up the steeper slopes.  Alan continued on foot and arrived a half hour before his father.

“The end of the car was tragic.”  A few boys had seen the car parked outside the gaol and removed the rocks under the tires that were holding it in place.  They then ran it down the hill and into a swamp.  “For a month the police searched for it and then discovered it lying there half submerged in mud and bull rushes.”  The cost of towing, new batteries, repairs and storage fees were more than Richard could afford and he had to give up driving the car.

The monetary gift from the people of Orillia had made Richard’s “young heart younger,” gave his family a treasured story, “enriched the legal profession,” and “gave the police force of Toronto adventure.”

One old photo of Richard in his electric car has survived.  The other image is of a similar electric car, a Columbia Victoria. (Both pictured below). 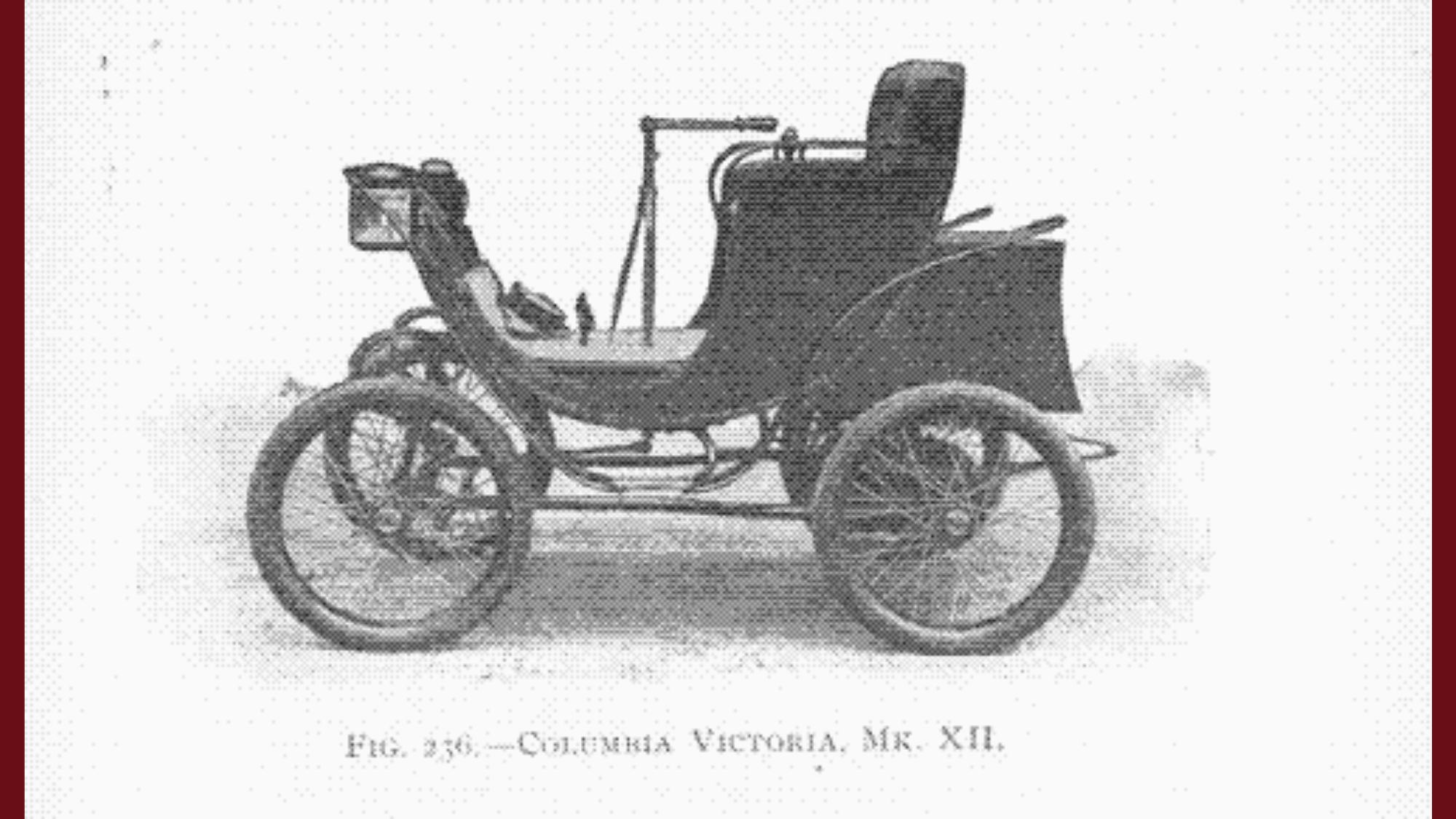