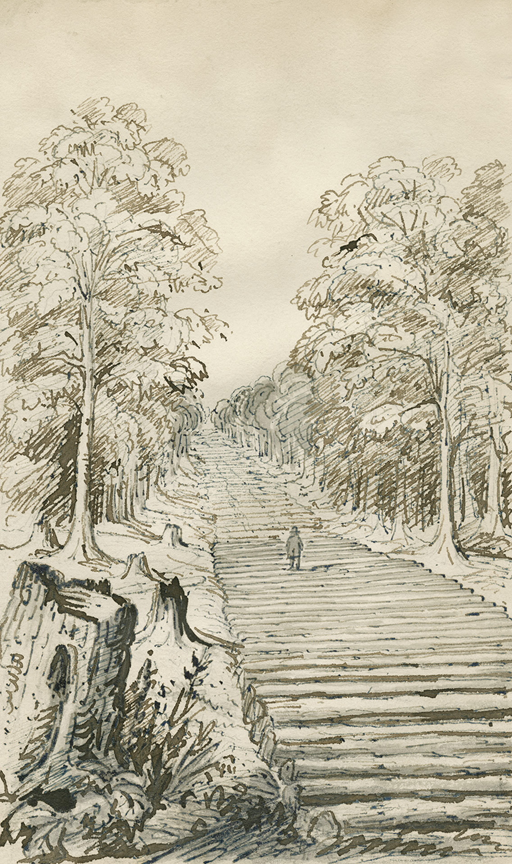 Corduroy Road Over a Swamp in Orillia Township, Ontario

Jacob Gill and his relatives are one of a number of Orillia’s founding families who have been researched by OMAH History Committee member Fred Blair. Jacob left a lasting legacy, having built both the Coldwater Mill and the Marchmont Mill in the early 1800s. His daughter Hester, who later married Leonard Wilson, wrote a series of recollections of her early life in Orillia Township. The following excerpt remains largely as she wrote it, except for some corrections in spelling and punctuation.

In 1833, at 17 years old, Hester wrote: “My first ride to Coldwater I went over on horseback alone on a little pony of father’s starting about 9 in the morning. At that time the road consisted of a track cut through the woods and log bridges to cross the North River and another at Purbrook as it was called afterwards without a house of any kind from Bass Lake to nearly across the big hill at Coldwater. My father was building the mills for the Indians — both saw and flour mills.

“The next ride was in the fall of 1846. My father had been ill for a long time at Coldwater and I got word if I wanted to see him alive, I would have to go immediately, [but there was] no conveyance of any kind to be had and only one horse, a three-year-old colt. … I told the neighbors that were trying to help me I would go on him so they got a saddle somewhere and got it on him and took three men to get me on him and then they strapped a quilt on behind the saddle and put my eldest little boy, about 9 years old, on and we started about 4 in the afternoon from our farm on the town line between North and South Orillia.

“We had to cross a long causeway just before we came to Coldwater Road, the horse got his foot in a hole in the logs and threw him down on his side.  How it was that horse or riders were not hurt I never could tell but we were not. Well, we got up again, I led the horse over to a log and got on him myself but could not get the boy on so went around to Mr. Fraser’s on the Coldwater Road and he put him on again, by this time it was getting dark. Well, we went on and when we got the other side of Purbrook the horse would keep turning to go back home, so I let him turn but always turned him all the way around so as to go to Coldwater. Well, we got there about 10 o’clock, my father was still living and lived 3 days after.”

A causeway was a corduroy road like the one image here. Mr. Fraser was probably Henry Fraser who at one time had a tavern at Prices Corner and later built a hotel in Orillia. There was a stage coach to Coldwater as of 1835 but it made the journey only once a day.

Ornaments from Christmases Past

By Mary Ann Grant   Years ago, this writer became a collector of old-fashioned ornaments that fell out of favour with the advent of plastic. Whether antique, vintage or reproduction, they are precious for their beauty and unique design. They are not just the red... 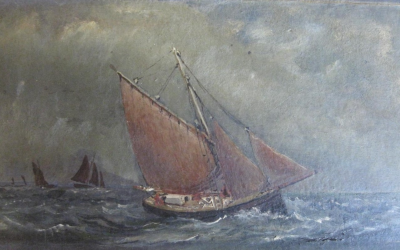 By Fred Blair ​If you found the name “Tom Thomson” on the back of a landscape painting, would you think of the Group of Seven?  This is a wandering tale about a painting and the possible connections between four landscape painters and Stephen Leacock. In 1888, the...